Sssh! The Week’s daily briefing reports:
OBAMA: MORE GOLF THAN ECONOMICS
US President Barack Obama has spent almost 1,000 hours on holiday and playing golf since he took office in January 2009 but has spent less than half that amount of time, 474.4 hours, in meetings about the economy. The claim comes in a report from the Government Accountability Institute, based on analysis of the presidential diary and newspaper reports. 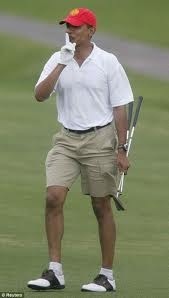 One thought on “My goodness!”