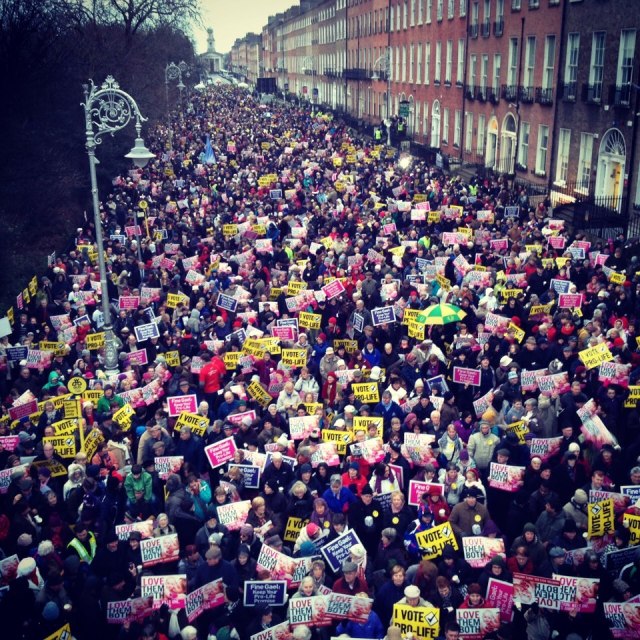 In the New York Times today Thomas Friedman raises a question posed by a former C.I.A. analyst which roused my curiosity and made me half wonder if it might not be a lead-in to a piece about our current discontents here in Ireland.

Why are we seeing so many popular street revolts in democracies? OK, our generally polite demonstrations on the pro-life issue have hardly been revolts. Nevertheless, the underlying anger and resentment which they reveal do not seem to be too far short of something more serious and do suggest that in them there might be a suggestion of the green shoots of an Irish Spring.

In mulling over the analyst’s question Friedman describes a political response which will be familiar to all in a Brazilian, Turkish or Russian context. But it also has a resonance in the context of many political conversations which I’m sure many of us have had on the island of Ireland. The rising discontent is palpable since it became clear that the bigger partner in our current government nakedly betrayed the trust which a sizeable portion of its electorate placed in it at the last general election on the issue of abortion.

The American analyst, Paul R. Pillar, in a recent essay in The National Interest, asks: “The governments being protested against were freely and democratically elected. With the ballot box available, why should there be recourse to the street?”

Friedman believes that the convergence of three phenomena provides an answer. Whatever about the other two, the first certainly has an uncomfortably familiar ring in the Irish contect. It is what he describes as the rise and proliferation of illiberal ‘majoritarian’ democracies. “In Russia, Turkey and today’s Egypt, we have seen mass demonstrations to protest ‘majoritarianism’ — ruling parties that were democratically elected (or “sort of” in Russia’s case) but interpret their elections as a writ to do whatever they want once in office, including ignoring the opposition, choking the news media and otherwise behaving in imperious or corrupt ways, as if democracy is only about the right to vote, not rights in general and especially minority rights.”

Rights is what is vexing the Irish electorate just now – not just any ordinary rights but what most people consider basic fundamental rights, like the right to life and the right of freedom of conscience. The discontented among the Irish consider that these rights are now being trampled on by their government. Not all politicians are ignoring what many consider to be the high-handed and deeply undemocratic behaviour or the ruling parties in government.  Some are resisting being dragooned into supporting the pro-abortion legislation now being pushed through the parliament.

One, who just yesterday declared his rebellion against the Party, summed up the basis for his revolt as follows:

“This bill is not in line with Fine Gael values and some of our long-term supporters are very distressed with the current state of affairs,” Fine Gael TD Terence Flanagan has told the Sunday Independent newspaper. “I am totally in favour of women getting all necessary supports during pregnancies,” he said, but added: “Most people would not be impressed with a TD who voted for something that they believed to be fundamentally wrong.”

Flanagan has declared that in the new law which will require Irish hoppitals to perform abortions there is “real and significant cultural change” being engineered in those institutions.

Highlighting one of the things which is driving pro-life Irish people to despair in their government, he pointed to the way in which the parliament has been simply going through the motions of debate and ignoring the arguments put before it. He said: “Over the course of two sets of hearings conducted by the Joint Committee on Health and Children, we were presented with compelling evidence that abortion is not a treatment for suicidal intent; in fact, it may even contribute to it.”

The Fine Gael TD said: “It gives me no pleasure to dissent from my party, but prior to the last general election, Fine Gael gave a commitment to the electorate that it was ‘opposed to the legalisation of abortion’. In deciding how to legislate on such a uniquely life-or-death issue as abortion, a legislator must have the freedom to follow his or her own conscience on the matter.” He added that he did not agree “with those who say we should set aside our own beliefs when we deal with so grave an issue”. As a legislator he considers that “I am constitutionally free to oppose this bill and I am conscientiously obliged to do so”.

What the protesters in Turkey, Russia and Egypt all have in common, Friedman argues, is a powerful sense of “theft,” a sense that the people who got elected are stealing something more than money: the people’s voice and right to participate in governance. Nothing can make a new democrat, someone who just earned the right to vote, angrier, he wrote. The Irish are not exactly “new democrats”. They have struggled against governments which imposed unjust laws before. They are angry now because they have to do what they never thought they might have to do – give vent to extra-parliamentary rage against their own elected government.

As Egyptian satirist Bassem Youssef wrote in the Egyptian daily Al Shorouk last week, on the first anniversary of the election of President Mohamed Morsi of the Muslim Brotherhood’s party: “We have a president who promised that a balanced constituent assembly would work on a constitution that everyone agrees on. We have a president who promised to be representative, but placed members of his Muslim Brotherhood in every position of power. We have a president and a party that broke all their promises, so the people have no choice but to take to the streets.”

The Irish now have a prime minister leading his party toward legislation which is the very opposite of what he promised them to get elected. Furthermore, he is doing so in spite of all the expert evidence being given to him that his proposed legislation is deeply flawed. He is seen as not even attempting to address this evidence with any kind of counter-argument. His actions are seen as having all the subtlety of a steamroller. It is the same fuel which is driving all discontented democracies.

Friedman’s second converging element is in the economic sphere and this is not absent from the Irish scene either. The rising anger he sees across democracies comes, he thinks, from the failure of governments to level with their electorates on what is really going on and in particular about all those things which are squeezing the middle class and the aspiring middle class, the working backbone of all electorates.

The last element contributing to this convergence is the crucial one of means to an end. Democracies now have new weapons in their arsenals. “Thanks”‘ Friedman says, “to the proliferation of smart-phones, tablets, Twitter, Facebook and blogging, aggrieved individuals now have much more power to engage in, and require their leaders to engage in, two-way conversations — and they have much greater ability to link up with others who share their views to hold flash protests. As Leon Aron, the Russian historian at the American Enterprise Institute, put it, ‘the turnaround time’ between sense of grievance and action in today’s world is lightning fast and getting faster.” All this is also playing out in the Irish body-politic, playing a big part in bringing 40,000 demonstrators on to Dublin’s street in the beginning of June, the biggest pro-life demonstration in the country’s history.

The net result of Friedman’s convergence across the world is this: “Autocracy”, Friedman writes, “is less sustainable than ever. Democracies are more prevalent than ever — but they will also be more volatile than ever. Look for more people in the streets more often over more issues with more independent means to tell their stories at ever-louder decibels.” Why should Ireland be an exception?