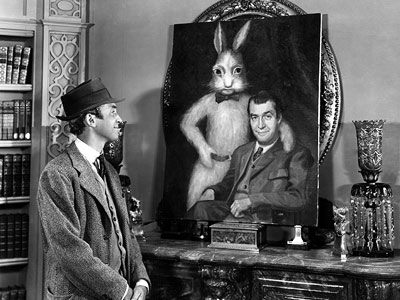 In the middle of the twentieth century a play was produced on Broadway. Five years later it was filmed with James Stewart in the lead role but not the title role. The title role in both play and film was played by a giant rabbit who remained invisible throughout the performance. His name was Harvey and his presence not only dominated the play but in the course of it he transformed the lives of all the main characters.

On a superficial level the play was a farce. It was an uproarious farce, at the expense of a sizeable number of silly characters who got themselves into all sorts of predicaments because one of them made a nuisance of himself by thinking that he had a special friend who didn’t even exist. He compounded the nuisance by insisting on introducing this invisible friend to everyone he met.

But on another reading all this was not as superficial as it might seem. At the end of the play we are left scratching our heads wondering whether crazy Elwood P. Dowd has the better grasp of what the meaning of life is than anyone else in the play. Without once getting angry, annoyed or frustrated, Elwood penetrates the folly, cruelty and hypocrisy of modern life and society and leads the play’s other main characters to a better and deeper appreciation of who they are and what they are.

Where did this play come from? It came from the heart and soul of Mary Chase, for which she won a Pulitzer Prize. It still remains on the list of Broadway’s longest running plays of the twentieth century and has been filmed in multiple versions – although none were as successful as the 1950 James Stewart version. The latest movie effort was to be undertaken by Stephen Spielberg but has since been abandoned because of disagreement over the interpretation proposed.

Mary Chase was born Mary Agnes McDonough Coyle and brought to this story all the sense and sensibility of her Irish-American Catholic upbringing. Inherent, although implicit, in the play is her understanding of this world and the next, and the interaction between the two. The close-knit family in which she grew up kept its links to Ireland and she was steeped in the stories and myths, full of spiritual vision and allusions, of the old country. Harvey is described in the play a Pookah, a benign spirit in Irish mythology.

What was Harvey really? Who was Harvey? Harvey might be read as nothing other than the presence of the Divine – or maybe a messenger from the Divine, the Guardian Angel of Christian theology, guiding a human being to see the multiple truths about our existence and to a proper understanding of what our relationships with each other should really be in this sometimes crazy world.

Everyone loves Elwood but they do not really understand the source of his goodness and his kindness – namely the Presence which he calls Harvey. But it is that Presence which makes Elwood everything that he is, and which also makes him appear mad to most of those around him.

The plot is simple. Elwood lives with his sister and her daughter. The house they live in is, however, Elwood’s, left to him inexplicably by his late mother. After a series of false starts on the search for a suitable husband for her daughter – for which they both blame Elwood’s eccentricity – they try to have him committed to the care of a psychiatric home run by a Dr. Chumley. In the best traditions of high farce, that is when things really begin to go wrong and we soon find that it is Elwood’s sister who gets incarcerated. Chaos reigns for a period as the “normal” human beings try to cope with the “abnormal” Ellwood. Theirs is a world dominated by social climbers, lawyers and psychiatrists. His is a much simpler and straightforward world.

They all end up being disarmed by Ellwood and his friend Harvey. Laid bare is all the unpleasantness wrought by their cleverness.  This contrasts with the simple goodness of Elwood’s vision of the world.

The second comes from the taxi-driver who brings people to and from Dr. Chumley’s Rest Home. He talks to the bewildered characters who have just sent Ellwood to the surgery for the serum injection which is going to make him “normal” again.

I’ve been driving this route for 15 years. I’ve brought them out here to get that stuff, and I’ve drove them home after they had it. It changes them… On the way out here, they sit back and enjoy the ride. They talk to me, sometimes we stop and watch the sunset, and look at the birds fly. And sometimes we stop and watch the birds when there ain’t no birds. And look at the sunset when it’s raining. We have a swell time. And I always get a big tip. But afterwards, uh oh! …They crab, crab, crab. They yell at me. Watch the lights. Watch the brakes, Watch the intersection. They scream at me to hurry. They got no faith in me, or my buggy. Yet, it’s the same cab, the same driver. And we’re going back over the very same road. It’s no fun. And no tips… After this he’ll be a perfectly normal human being and you know what stinkers they are.

At that point they all look at each other and then rush in to rescue Elwood. We don’t know that they all lived happily ever after, but we do know that they all learned something from their encounter with Elwood and his friend Harvey. His niece, Myrtle Mae, finds love with the Rest Home attendant; Dr. Chumley is a happier man and his assistant seems to be about to settle down with the nurse who has been smitten by an unrequited love for him for the duration of the play.

Harvey is an archetype, a story of the Holy Fool who is no fool at all. Ellwood tells the psychiatrist, Well, I’ve wrestled with reality for 35 years, Doctor, and I’m happy to state I finally won out over it. He sees what others do not see. Because he “sees” Harvey he actually sees other people, he loves other people, and he respects and values everyone he meets. He tells us at one point: I always have a wonderful time, wherever I am, whoever I’m with.

He has this vision of life because he has the eternal vision given to him by Harvey, revealed in one of the qualities he described in Harvey. Oh, yes! Yes. Yes — these things always work out just the way Harvey says they will. He is very, very versatile. Did I tell you he could stop clocks? Well, you’ve heard the expression ‘His face would stop a clock’? Well, Harvey can look at your clock and stop it. And you can go anywhere you like — with anyone you like — and stay as long as you like. And when you get back, not one minute will have ticked by. … You see, science has overcome time and space. Well, Harvey has overcome not only time and space — but any objections.

It is hard not to think that the modern world in the 21st century is confronting another manifestation of this archetype in none other than the new leader of the Catholic Church, Pope Francis. Here is a man who exudes affection, kindness, and attracts the interest an admiration of millions all around the world.

But do they really know this man? Do they know why he is doing the things he is doing, saying the things he is saying? Do they know what it is that makes him different from all the other leaders on this planet – that he is moved by a life sustaining Spirit whom they do not know nor want to know? We do not call that Spirit Harvey – but we might.  Elwood was seen as “mad” by all those around him. There are not a few others whom history recounts that they were also told they were mad – or worse – when their wisdom came up against the conventional wisdoms of their day. It is an old story but it is one which is worth telling again and again.