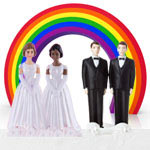 Some Irish people are a little dismayed this morning, opening their newspapers or listening to their radios, finding a priest asking them to vote for the redefinition of marriage in the forthcoming referendum on the issue. They shouldn’t be.
The early history of Christianity should help any modern Christians trying hard to live by the authentic teaching of Christ in dealing with the disappointment occasioned by the utterances of Fr. Iggy O’Donovan. O’Donovan may not be Gnostic and may be small fry when taken in the context of what authentic Christianity was up against in those first centuries. But he is cut from the same cloth as the likes of Valentinius, Marcion and Tatian. Pedigree, or association with faithful Christians, is no gaurantor of orthodoxy.
Blessed John Henry Newman reminds us, intially quoting another source:

“When [the reader of Christian history] comes to the second century,” says Dr. (Edward) Burton, “he finds that Gnosticism, under some form or other, was professed in every part of the then civilized world. He finds it divided into schools, as numerously and as zealously attended as any which Greece or Asia could boast in their happiest days. He meets with names totally unknown to him before, which excited as much sensation as those of Aristotle or Plato. He hears of volumes having been written in support of this new philosophy, not one of which has survived to our own day.”[221:1] Many of the founders of these sects had been Christians; others were of Jewish parentage; others were more or less connected in fact with the Pagan rites to which their own bore so great a resemblance. Montanus seems even to have been a mutilated priest of Cybele; the followers of Prodicus professed to possess the secret books of Zoroaster; and the doctrine of dualism, which so many of the sects held, is to be traced to the same source. Basilides seems to have recognized Mithras as the Supreme Being, or the Prince of Angels, or the Sun, if Mithras is equivalent to Abraxas, which was inscribed upon his amulets: on the other hand, he is said to have been taught by an immediate disciple of St. Peter, and Valentinus by an immediate disciple of St. Paul. Marcion was the son of a Bishop of Pontus; Tatian, a disciple of St. Justin Martyr.

The Church has had to contend with this kind of thing throughout its history and will always have to do so. But if the gates of Hell will not prevail against it why should a few turbulent clerics worry it?