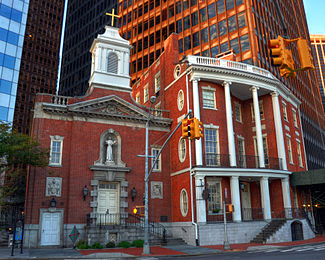 The Seton home in New York City was located at the site on which a church now stands in her honor.

Today’s BACK STORY from the New York Times:

When Pope Francis visits the U.S. next week for the first time, his itinerary will include stops in New York and Philadelphia, the birthplaces of the only Roman Catholic saints born in the 13 original American colonies or 50 states.

Mother Seton was born in 1774, two years before the signing of the Declaration of Independence.

She started the first Catholic girl’s school in the nation, in Emmitsburg, Md., and the first American congregation of religious sisters, the Sisters of Charity.

Mother Katharine Drexel, a Philadelphia nun who spent her life and her share of a family fortune on the network of schools for Native Americans and blacks that she started, is the first saint who was an American citizen from birth.

Mother Drexel died in 1955, and Pope John Paul II declared her a saint in 2000 — speedy, by modern church standards.

In his nearly 27-year papacy, John Paul II signed off on more canonizations (482) than all of his modern predecessors combined.

And if Catholicism is all it’s supposed to be we must hope there are a lot more who could be ‘signed off’.