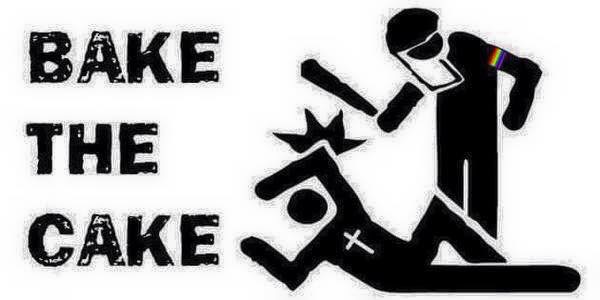 Bakers are in the news again. It is interesting that nearly 500 years ago an Irish baker was executed for practicing his faith.

This week, as the London Daily Telegraph reminds us today, another baker is in the courts of law defending his faith and his conscience. In its editorial the Telegraph tells us and reflects on the strange and important case:

The Court of Appeal in Northern Ireland will this week begin hearing the great “gay cake” case. This may sound like a joke, but is a deadly serious matter concerning freedom of expression and the right of a person to hold an opinion or object to someone else’s.The appellants are Ashers, a bakery run by two devout Christians, Karen and Colin McArthur. Last May, they were fined for refusing to bake a cake for a gay couple. The law states that people cannot be discriminated against in the provision of services on the ground of race, religion, gender or sexual orientation. However, they declined the order not because their customers were homosexual but because they were asked to ice the slogan “Support Gay Marriage” on the cake.

The judge in the district court ruled that although the bakers were committed Christians and opposed to same-sex marriage, they were not entitled to refuse to provide the service. However, they were not unwilling to bake the cake, rather they didn’t want to endorse a view to which they did not subscribe. More than that, the legislation allowing gay marriage in the rest of the United Kingdom has not been introduced in Northern Ireland. The McArthurs objected to promoting a change in the law with which they did not agree.

We are in the realms of thought crime here and even Peter Tatchell, the veteran gay rights campaigner who initially welcomed the prosecution, has changed his mind about it. He said the law against discrimination was meant to protect people with differing views, not to force upon others opinions to which they conscientiously object. Indeed so. The conviction must be overturned.

Colin and Karen will unlikely have to face the fate of Mathew Lambert, their 16th century predecessor. But they are suffering and are being made to suffer by the judicial shenanigans driven by the same force which brought Lambert and his companions to their death – intolerance of conscience.

Pursued by English troops after the collapse of the Second Desmond Rebellion against Queen Elizabeth I, James Eustace and his chaplain, Father Robert Rochford, eventually found refuge with Matthew Lambert, a Wexford baker. Lambert fed them and arranged with five sailor acquaintances for safe passage by ship for them. Lambert was betrayed, along with sailors Patrick Cavanagh, Edward Cheevers, Robert Myler, and two others. They were arrested, imprisoned, and tortured.

The authorities heard of the plan beforehand and Matthew was arrested together with his five sailor friends. Thrown into prison, they were questioned about politics and religion. Lambert’s reply was: “I am not a learned man. I am unable to debate with you, but I can tell you this, I am a Catholic and I believe whatever our Holy Mother the Catholic Church believes.” They were found guilty of treason and hanged, drawn, and quartered in Wexford on 5 July 1581.