Edward Feser, increasingly emerging as one of the sanest and clearest minds of our age, treats us this week to a superb – well, in fact it was last week – review of a new book on the pitfalls left for us in the philosophical landscape by that revered German, Immanuel Kant. Those pitfalls of course continue to be dug deeper and deeper by the many who have fallen into them over the past two centuries – and they just keep digging. Feser and his subject are screaming at them to stop.

Postmodernist scepticism and triumphalist scientism might seem to have little in common. But as neither doctrine ever tires of reminding us, appearances can be deceiving. Among the things they share is scorn for philosophy’s traditional claim to provide objective knowledge of a kind distinct from empirical science: in short, metaphysics. Yet to justify that scorn would require taking an extra-scientific cognitive standpoint and showing from it either that science alone gets hold of reality – as scientism claims – or that not even science does so – as postmodernism alleges. And such a standpoint is precisely a metaphysical one. Thus, as Étienne Gilson wrote, does philosophy always bury its undertakers.

Raymond Tallis tosses a new shovelful of dirt onto them with each addition to his impressive oeuvre. It only helps that he is a polymath, not an academic philosopher. Formally trained in medicine, he is well informed about science, and thus not intimidated by it, as too many academic philosophers are. Not least among his other virtues is the unacademic elegance of his prose.

Feser is sharp and his critique is utterly relevant to our time. He is clearly grateful that a man like Tallis, with his scientific and polymath background, from an atheistic and Darwinian perspective, can see as clearly as he does, the inconsistencies of the postmodern and scientist positions.

The notion of a mind-independent reality thus seems to vanish entirely. Common sense thinks of cognition as a window onto the external world. Kant appears to have inadvertently transformed it into a mirror.

Nor is such a view merely a historical relic. Postmodernism is essentially a relativist variation on Kantian epistemology, though that is not a connection Tallis draws in this book. What he does note is that Kant’s idealism has taken on a scientific guise in the physicist John Wheeler’s proposal that quantum mechanics shows the world to depend on the observer. As Tallis argues, the problems that faced Kant’s version remain for this reformulation. If quantum phenomena are among the physical causes that led to us, they can hardly depend on us. Incoherence tarted up in the language of physics is still incoherence.

This review is a long and rewarding one. Out of fairness to the TLS Garvan Hill can only give you these briefest of extracts. If you want a really refreshing vision of a world in which common sense might once again reign, read it all.

The mystery of how we make sense of the world

Read No we Kant via the TLS app (£), library, or good newsagents – if you hurry. 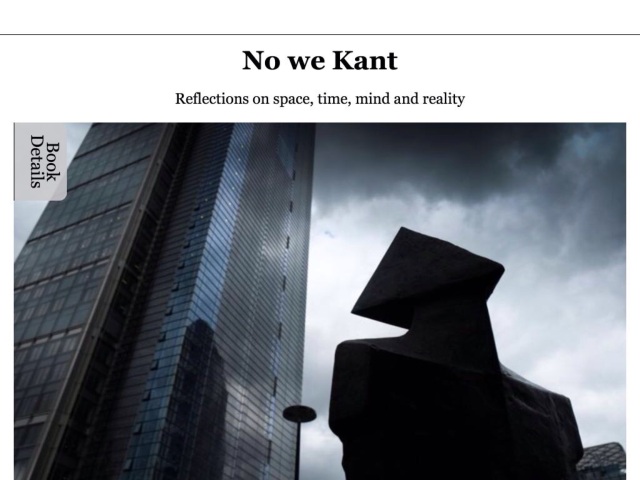 One thought on “Looking for some common sense? Read on…”