“Excluding any known wishes of the patient or family to the contrary, a decision to preserve the life of a patient in a state of permanent unconsciousness based on respect for life itself is morally no more sound than a decision to take that life.”

Those words must surely send a shiver down the spine – or more likely, land a blow to the solar plexus – of any half sensitive moral conscience. They are reported on the Careful! blog of MercatorNet.com this morning and they come from an American doctor writing in the latest issue of the leading journal Bioethics.  There, Dr Catherine Constable, of New York University School of Medicine, tells us that artificial nutrition and hydration should be withdrawn from all patients in a permanent vegetative state – unless there is clear evidence that they want to be kept alive. She argues that the current presumption in favour of maintaining ANH is misguided. It is not in the interests of the patient nor, because of its cost, in the interest of society.

Surely we have reached the nightmare of moral chaos to which Joseph Conrad’s Mr. Kurtz, and his later incarnation, Francis Ford Coppola’s Col. Kurtz, descended in Heart of Darkness/Apocalypse Now when (in Coppola’s film) he confessed and protested his hellish vision of a judgement-free world – by which he meant the judgement of conscience –  in which the only criteria of choice is the selfish pursuit of our pragmatic ideologies and where the most sacred of all human gifts, life itself, is placed on the sacrificial altar of that merciless god.

“I’ve seen horrors… horrors that you’ve seen”, Kurtz – a rogue US Marine commander fighting the Viet Cong – expounded his confused and contradictory moral reasoning to Willard who has been sent to “terminate” him. “But you have no right to call me a murderer. You have a right to kill me. You have a right to do that… but you have no right to judge me. It’s impossible for words to describe what is necessary to those who do not know what horror means. Horror… Horror has a face… and you must make a friend of horror. Horror and moral terror are your friends. If they are not, then they are enemies to be feared. They are truly enemies!”

It is hard not to conclude, reading things like those written by Dr. Constable, that we have already surrendered to that horror. Because some living human beings are not able to express their intentions it is deemed that they are no longer interested in living. Therefore, “because of its cost,” their lives are no longer “in the interest of society.”

Kurtz recalled the moment he surrendered his conscience to the evil of a world freed from the restrictions imposed by that inner voice:

“I remember when I was with Special Forces… seems a thousand centuries ago. We went into a camp to inoculate some children. We left the camp after we had inoculated the children for polio, and this old man came running after us and he was crying. He couldn’t see. We went back there, and they had come and hacked off every inoculated arm. There they were in a pile. A pile of little arms. And I remember… I… I… I cried, I wept like some grandmother. I wanted to tear my teeth out; I didn’t know what I wanted to do! And I want to remember it. I never want to forget it… I never want to forget.

“And then I realized… like I was shot… like I was shot with a diamond… a diamond bullet right through my forehead. And I thought, my God… the genius of that! The genius! The will to do that! Perfect, genuine, complete, crystalline, pure. And then I realized they were stronger than we, because they could stand that these were not monsters, these were men… trained cadres. These men who fought with their hearts, who had families, who had children, who were filled with love… but they had the strength… the strength… to do that. If I had ten divisions of those men, our troubles here would be over very quickly. You have to have men who are moral… and at the same time who are able to utilize their primordial instincts to kill without feeling… without passion… without judgment… without judgment! Because it’s judgment that defeats us.”

Can we not say that  forces of “enlightenment” at work in the propagation of this new morality represented by Dr. Constable are driven by the same dreadful ethic which Kurtz adopted in which the judgement of conscience is seen as a hindrance to the proper running of this world of ours. Let us set aside all those “taboos”, they say, with which we clutter our proper judgement and let us act coldly, clinically and ruthlessly for the end we desire. Kurtz knew – and Conrad knew – in his heart where all that led, to the horror of a hell on earth. The leaders of our new enlightenment, sadly, do not seem to know.

Am I exaggerating? I don’t think so. It is all around us and is clearly manifested in the spectacle unfolding in the United States’ current political debate on the Obama “mandate”. The subtext of this entire proposal is the disregard and sacrifice of moral conscience – as understood for 2000 years in its fullest clarity, and for eons before that, albeit in a less clear way – on the altar of personal choice and convenience. It all emanates from a philosophy of freedom devoid of any judgement based on a rational and principled understanding of the truth of our nature. It is a philosophy of freedom where freedom is seen as the right to do what you like within the arbitrary bounds of the general will of a given group of people – which we know even from history can lead to the greatest atrocity. Slavery was once supported by such a general will. The deaths of millions of unborn human beings is now enjoying the same support.

Another more recent visit to the heart of darkness was Cormac McCarthy’s  No Country For Old Men, filmed by the Coen brothers in 2007. In the book, the wise and weary Sheriff Bell, who is pursuing the semi-mystical but diabolical Chigurh, reflects on the sorry state of our society in telling us of an encounter with a fully paid-up member of our brave new world. 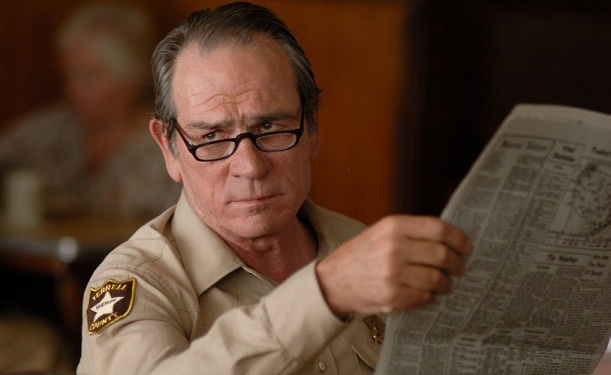 The tragedy may be just this – that the conversation has ended. But perhaps there are a few more battles to be fought and with them the tide may be turned and sanity may return to the earth. If not, like Sherrif Bell said, we may all look forward to being put to sleep.