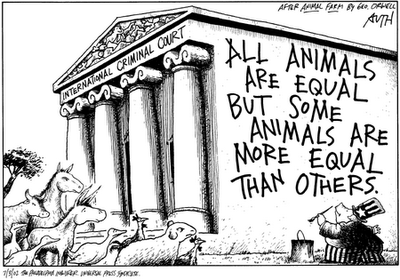 For more than two centuries the three pillars of western democracy have been Liberty, Equality and Fraternity. Enshrined and balanced in the rule of law as we know it, they have been the handmaids of our evolving civilized world.  Crucial to their influence, however, is that word “balance” because if any one of them becomes distorted the house which they support will come tumbling down.

We are now in crisis, because that very act of distortion is being perpetrated before our very eyes – the pillar of Equality is day by day assuming gross characteristics which have already begun to cripple its two siblings, Liberty and Fraternity. Someone else can draw up the catalogue – Obama’s Mandate alone will provide ample illustration. Suffice here to draw on one authoritative source which lists a frightening scenario of injustice which, in the name of Equality, is now threatening any number of citizens in any number of states who treasure their Liberty and their Fraternity.

Britain’s Coalition For Marriage has sought an expert legal opinion on the perceived threats to freedom of conscience in the destruction of marriage now promised by the British Government. Add to that similar threats in the public policies of the USA, France and Ireland – to name just three. If you take away freedom of conscience you destroy, not only Liberty itself but one of the foundations of Fraternity, respect for the individual conscience of my brother.

Concerned that worries about gay marriage and freedom of conscience were too narrowly focused, the C4M commissioned a legal opinion from leading human rights lawyer, Aidan O’Neill QC. Mr O’Neill was asked to give his expert advice on a series of scenarios related to legalising gay marriage which took the focus beyond places of worship and ministers of religion who conduct weddings. They added hypothetical cases which dealt with the impact in the workplace, in schools and in other areas of everyday life which they felt had been been overlooked.

For example, what would be likely happen to a Church of England chaplain working in the state-run National Health Service who, while conducting a wedding service in his parish church, preached that marriage is only for one man and one woman? If his NHS bosses found out about this would he be disciplined for breaching NHS diversity policy?

Mr. O’Neill’s view is that under the Equality Act 2010 the NHS managers would have proper grounds for justifying disciplinary action, even if the chaplain was preaching in his own church outside work time. Furthermore, the situation would be the same for any chaplain employed within the public sector, such as armed forces chaplains or university chaplains.

What about a primary school teacher who is asked to use a storybook about gay marriage called King & King? This book is recommended by local authorities and by gay rights charities. Would a conscientiously Christian teacher who says using the book conflicts with her religious beliefs about marriage be threatened with dismissal unless she backed down?

O’Neill says yes, she certainly would and that the school would be within its legal rights to dismiss her if she refuses to use the material.

What about the case where parents ask for their child to be withdrawn from school lessons on the history of gay marriage, for deeply-held religious reasons? The parents might say that they have a right to withdraw their child under European Convention on Human Rights. But the school might refuse to accept this pleading that it is under a legal duty to promote equality.

How would that scenario play out in schools which are explicitly designated as “faith schools”? He said: “If the school in question were a faith school, or otherwise one with a religious ethos within the State sector in England and Wales, this would make no difference to my answer”

Then there is the case of fostering. Take a couple which applies to be foster carers. They tell social workers they are motivated to care for children because of their Christian faith. On hearing this, the social workers ask them whether they support gay marriage. The couple says they do not, and the social workers halt the application because of equality and discrimination policies. O’Neill confirmed that a local authority fostering agency would have legitimate legal grounds for acting this way.

This opinion can be backed up by a judgement already handed down by a British court. In February, 2011, Eunice and Owen Johns, a Christian couple, married almost 40 years, were deemed by the High Court to be no longer eligible for fostering children aged between five and 10. They were deemed unsuitable, in law, to do so any longer because they were unwilling to promote a homosexual lifestyle to a child. Neither Mr nor Mrs Johns had anything against gay people but they were not in favour of sex before marriage, whatever an individual’s orientation.

Mr. O’Neill was asked about a case where a church hires a council-owned community centre each week for its youth club. The church website states that it will only conduct opposite-sex marriages. Someone complains to the council, and while the church can’t be forced to conduct gay weddings, it is stopped from hiring the community centre. “Yes”,  he says, the council would be within its legal rights to do this.

Then there is the question of state employees in registry offices. At present a local authority can decide to accommodate the religious beliefs of one of its registrars by not designating him or her to be a “civil partnership registrar”. Other registrars within the local authority’s team are sufficient to provide the service to the public.

Mr. O’Neill’s view is that if gay marriage becomes law, “that kind of adjustment to accommodate a registrar’s particular beliefs would no longer be an option for any employing authority because there would then be only be one system of marriage (rather than, as at present, a distinct civil partnership regime for same sex couples)”.

So there you have it. Equality trumps Liberty every time. Goodbye Liberty, and it is quite clear that the Equality which will prevail in this brave new world will be of the Orwellian variety: “All animals are equal but some animals are more equal than others”.