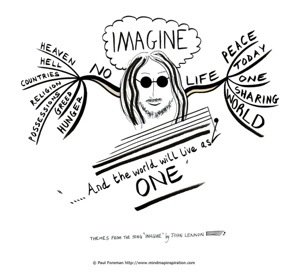 Imagine there’s no heaven,
It’s easy if you try.
No hell below us…
And no religion too…

Well, we have tried. Not only have we tried. We’ve been there, done that, and the results were pretty hellish.

Man’s inhumanity to man has a long track record and down through the millennia of recorded time there have been some grim epochs. But it is difficult to find any prolonged episodes of bloody mayhem and cruelty to match those which the twentieth century produced. And what is the common denominator linking the worst that this terrible epoch has left to haunt our collective memory? It is the very thing which John Lennon’s superficial and puerile anthem eulogies – an imagination devoid of God, religion and our sense of the eternal.

Power hungry men and cadres of men – mostly men – in the twentieth century tried like no other to imagine not just a world without religion, they actually tried to recreate the world in this image. What did we get as a result? We got tyrannies on a scale never seen by mankind before.

And whose were the fertile imaginations which bore the seeds of all these atrocities? Karl Marx, for whom religion was nothing more than another dangerous narcotic, and Frederic Nietzsche who had worked out in his wisdom that God had actually died.

This morning I read a report on the BBC website which included the following:

The hospital said there was an “extremely rigorous procedure” in place before any patient was put to death. “When we have a case which is… complicated, we ask ourselves more questions in order to be certain about the diagnosis,” Dr Jean-Michel Thomas said.

Thank you Dr. Thomas. Very reassuring. This was a report on the “euthanizing” – that means “killing”, in case the modern world’s euphemisms for the previously unthinkable are bewildering you – of a disturbed 44 year-old transvestite man/woman whose search for what he/she thought might be a true identity ended in despair. The Belgian doctors caring for him/her complied with the poor creature’s last desperate wish to be “put to death”.

This is not science fiction. This is happening every day – and the malady is spreading by the hour. This is the inevitable legacy of the world envisaged in John Lennon’s Imagine.

But there is another world we can imagine. It also is “easy if you try”. Imagine this, and see what it might promise us – and actually deliver. We have also been there, done that – but we just haven’t done it as well as we might have. Nevertheless, it seems fair to say that the Twelve chosen by Jesus Christ to be the first bishops of the Church which he founded did not just listen to him talking. They also walked the talk – with one exception. Look what happened to the world when they did, and when they gathered enough men and women, families and communities around them who were prepared to do the same. They transformed a cruel, murderous and euthanizing pagan Roman world.

Then look at what happened at different stages in the history of the Christian civilization which emanated from this foundation when its peoples lost the plot for one reason or another – leadership faltering, hedonism becoming rampant again: chaos returned and wars ensued.

But unlike John Lennon’s imagined universe, devoid as it is of any element of the sense of a meaningful destiny which resides somewhere in the heart of all men and women, the values at the core of the Christian vision speak volumes to mankind. When men and women rediscovered these again – and often it was the women who heard them first – Christian civilization was reinvigorated. It can be so reinvigorated again.

Imagine this, dream this: that the words of Pope Francis today, echoing truly as they do, the words of he whose vicar on earth he is, be taken to head and heart by every bishop in the world and be taken to heart and head by every co-worker priest serving with each of those bishops, – a somewhat more challenging hope – and be transmitted faithfully and energetically to all the faithful whom each of these has been ordained to serve. Imagine then that each member of that faithful community of Christians resolved to live by the spirit of these words.

Imagine this – a far better dream than that of poor John Lennon: That Pope Francis’ words on twitter over the past few weeks, words which reflect the very essence of the Christian vision, might have a fraction of the influence and penetration that much of the poisonous content of pop culture pouring out through the entertainment industry has.

Some samples to help your imagination:

Christ’s love and friendship are no illusion. On the Cross Jesus showed how real they are.

Jesus is more than a friend. He is a teacher of truth and life who shows us the way that leads to happiness.

We must not be afraid of solidarity; rather let us make all we have and are available to God.

We are all jars of clay, fragile and poor, yet we carry within us an immense treasure.

If we have found in Jesus meaning for our own lives, we cannot be indifferent to those who are suffering and sad.

Are we ready to be Christians full-time, showing our commitment by word and deed.

Charity, patience and tenderness are very beautiful gifts. If you have them, you want to share them with others.

Jesus didn’t save us with an idea. He humbled himself and became a man. The Word became Flesh.

Let’s learn to lose our lives for Christ, like a gift or a sacrifice. With Christ we lose nothing.

A Christian is never bored or sad. Rather, the one who loves Christ is full of joy and radiates joy.

With the “culture of waste”, human life is no longer considered the primary value to be respected and protected.

Add to this sample the distilled wisdom of the Christian message contained in the Compendium of the Catechism of the Catholic Church</em> and the Compendium of its social teaching, imagine it being taught and accepted as a standard to live by. Now that’s worth imagining and with that vision we can comfortably join in with John Lennon’s refrain,

You may say that I’m a dreamer
But I’m not the only one
I hope someday you’ll join us
And all the world will live as one.

“I do not like to use the word optimism” the Pope says in his now famous America interview, “because that is about a psychological attitude….I like to use the word hope instead, according to what we read in the Letter to the Hebrews, … The fathers of the faith kept walking, facing difficulties. And hope does not disappoint….Christian hope is not a ghost and it does not deceive. It is a theological virtue and therefore, ultimately, a gift from God that cannot be reduced to optimism, which is only human. God does not mislead hope; God cannot deny himself. God is all promise.”