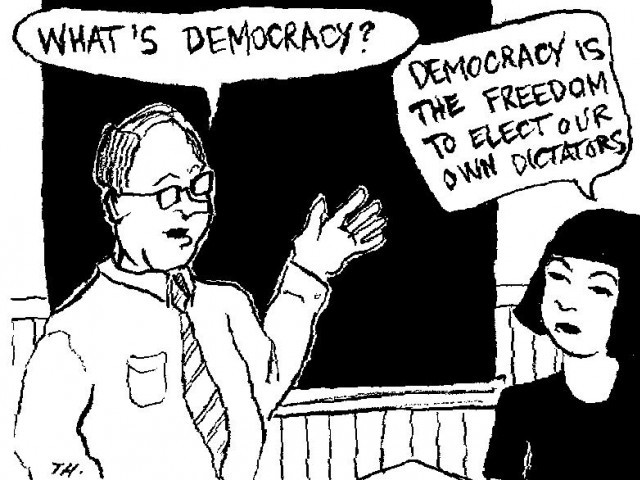 The corruption of a culture and the consequent corruption of a democracy which owes so much of its validity and integrity to the essence of a culture is a frightening prospect. It is a prospect facing not a few democracies in our time.
George Weigel hopes that Cardinal Walter Kasper’s comments in the aftermath of Ireland’s same-sex marriage referendum were misquoted. The Cardinal said: “A democratic state has the duty to respect the will of the people, and it seems clear that, if the majority of the people want such homosexual unions, the state has a duty to recognize such rights.”
That comment, taken at face value, Weigel says in a First Things article last week, “would suggest that a distinguished theologian-bishop has seriously misunderstood the nature of democracy and the Church’s teaching about just political communities.” Weigel also, “delicately” he says, without being too delicate, wonders how much of his own country’s sad recent history the good Cardinal has forgotten.
“For the first word that came to mind” Weigel says, “on reading Kasper’s remark was ‘Weimar.’” He wonders if he means ‘democratic’ as in the… democratic election (which) put Hitler and his Nazi Party in power, or the democratically elected German parliament which passed the notorious Ermächtigungsgesetz (Enabling Act), which effectively granted Hitler dictatorial powers?
He quotes St. John Paul II’s Centesimus Annus, which he describes as “the pinnacle of Catholic social teaching on the democratic experiment, which taught that “democracy” can never be reduced to mere “majority rule.”

“Majorities”, he reminds us, “can get the technicalities of public policy wrong. More gravely, majorities can also get the fundamentals of justice wrong: as many Germans did in the early 1930s, when the outcome of voting for the Nazi Party was clear to anyone who had read Hitler’s ‘Mein Kampf’ or listened to his rants; as many French citizens did in the early twentieth century, when the representatives they democratically elected dismantled Catholic schools, exiled members of religious orders, and expropriated their property; and as too many Americans did during our long national struggle over racial segregation, legally imposed by democratically-elected legislatures.”

Weigel reminds us of the pope-saint’s insistence…that, of the three interlocking parts of the free and virtuous society—a democratic polity, a free economy, and a vibrant public moral culture—the cultural sector is the key to the rest. For it takes a certain kind of people, formed in the arts of self-governance by a robust moral culture and living certain virtues, to operate the machinery of democracy and the free economy in ways that promote decency, justice, and solidarity, not degradation, injustice, or new forms of authoritarian bullying.

Weigel says nothing more about Ireland in this article but it may be added that the biggest shock for the nearly 40% percent of the Irish electorate which voted against the change in their Constitution was not the change in itself but the realisation that the culture of the country had changed so radically. Added to that was the shock that it was the two younger generations in the country which had brought about the change on the basis of an almost entirely emotional platform. Reasoned arguments from the “no change” side were ignored and constantly responded to with emotions ranging from sentimentalism, through arrogance down as far as naked hatred. All this was bolstered by a thoroughly deceitful abuse of the concept of equality – equating the sexual relationship of opposite sexes with that between two people of the same sex.
That the faith-and-reason based culture of a country had been so thoroughly dismantled and replaced with a barely rational and thoroughly sentimental alternative, careless of consequences, was for many a very disturbing experience. How did it happen?
The recalling by Weigel of the French experience of the dismantling of Catholic schools in the early part of the last century deepens the sense of foreboding of those concerned about the erosion of foundations of Irish culture. Most Irish schools are still nominally Catholic and Christian. But that nominal status seems destined to be short-lived and they will soon be entirely secular if the forces of the State and the now apparently secularist majority in the country have anything to do with it. The corrosive and self-inflicted secularisation of Irish education which has been going on for at least three generations now is a large part of the reason for what Irish people wakened up to on May 23 last.
By secularisation we do not mean the removal of institutions from ecclesiastical control. We mean the “disembedding” of all faith-based values from the ethos of educational institutions. We are talking about the process which has been traced so thoroughly by Charles Taylor (A Secular Age), Brad Gregory (The Unintended Reformation) and others in the past few years.
How did this secularisation of education in Ireland come about – apart, that is, from what it owes to the global process Taylor and Gregory have studied? There are never simple cut and dried reasons for these things but a huge contributor was the failure of the baby-boom generation to resist the sexual revolution and the drift toward hedonism which began (roughly) in the 1960s. The generation which they begat didn’t simply not resist this. They swallowed it hook-line-and-sinker. After that no one now even knows what Pope John Paul was talking about when he reminded Ireland’s young people in 1979 that “something else is needed” in their lives instead of drugs, sex and rock’n’roll. Many of them don’t think of much else now – other than money, celebrity and spectator sports. How else do you explain the extraordinary flight from stable marriage to divorce and cohabitation, the disregard for the stable family with a mother and father which the referendum result revealed – not to mention the country’s ranking for binge-drinking and suicide among the under 40s.
Hand in hand with this social decay went the capture by political ideologues of state agencies and services – education, health, justice and social services – and the media of social communication, vital to the cultural life of a country. These were the secularised new graduates from the Irish universities which themselves had come under the influence of American academic politically correct ideology.
These state agencies and the media combined to promote social policies in their own image and likeness which a not-too-bright-or-courageous elected parliament duly went along with. That ninety percent-plus of these representatives supported the same-sex marriage referendum proposal which was rejected by nearly forty percent of those who elected them is – or should be – deeply worrying for any lover of democracy.
Unlike the French, Ireland’s Catholic schools did not even have to wait for the state to dismantle them. In the post-sixties flight from faith they went into self-destruct mode all on their own. On the wave of muddled-to-bad teaching of Christian doctrine – moral included – which can be traced back to the 1970’s, generation after generation were left clueless about the foundations of their faith. The Catholic Church leaders of the era must take responsibility for this and indeed it can only be seen as another side of the coin which produced the careless dealing with those clergy, wolves in shepherd’s clothing, who in those decades perpetrated sexual abuse on those in their care. These same wolves were not only slaves to their own vicious and illicit passions but also victims of the woolly moral thinking which resulted from the ambivalence of some of their theology teachers about the clear moral teaching in Humanae Vitae.
We are all victims now and the barbarians at our gates in the form of ISIS may be far less threatening to the survival of our civilization than those in our midst.
Jonah Goldberg in his book The Tyranny of Clichés: How Liberals Cheat in the War of Ideas talks about the dangerous adulation of youth which infects our age and which betrays not only young people themselves but also jeopardises our civilization. In an interview about the book he said:

We have a popular culture that exalts young people simply because they’re young and I have a deep and abiding contempt for youth politics, certainly as it’s practiced on the Left… The assumption that we have to cater to young people because they’re young, and they’re the future and all that kind of stuff, is just a naked form of power worship. It assumes that since they’re going to run everything one day, we might as well cave into them now. This completely turns the idea of civilization on its head. Hannah Arendt once said that in “Every generation, Western civilization is invaded by barbarians – we call them ‘children.’”

The champions of same-sex marriage rode to victory in the Irish referendum thanks to tyrannical clichés. They had no arguments. All they had were meaningless slogans about a meaningless equality, based on the ludicrous Humpty Dumpty principle that we can make things mean what we say they mean. They did so by mobilising the under-forty voters and feeding them a great deal of romantic nonsense. It worked. The liberal Left now knows how it works and they are setting out to apply the same strategy to introduce abortion-on-demand to the country.
The way back from this trough of desolation will be long and arduous. It is not just an Irish problem. It is a problem for the remnant of Western civilization and it can only be countered at the level of education. The culture we had is now corrupted and only that remnant can revitalise it: by their families, by their devising adequate strategies for communal education, by Christians and all those of good will, whether Christian or not, with their commitment to the universal truths rooted in our very nature. The barbarians who descended on the Roman world destroyed the old civilization. They in turn, however, eventually withered away and their children’s children ceased to be barbarians because they grew into the light of the truth which had been slowly but surely growing inside that old Roman world. It can, and will, happen again. Believe.

One thought on “Democracy and the threat of self-destruction”