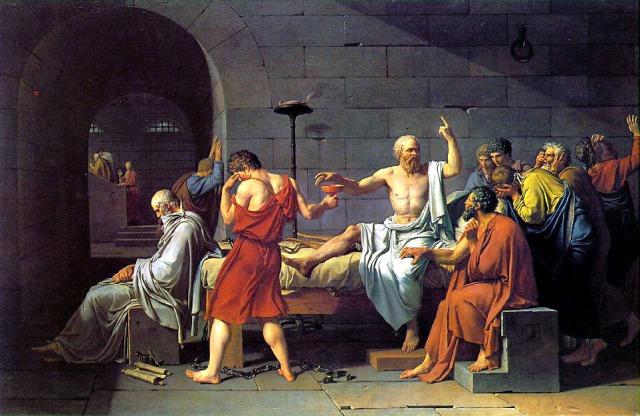 More people in the world today probably know who James Damore is than know who Socrates was. No problem – for there is a strong possibility that Damore may be the Socrates of our age. Just as the death of Socrates at the hands of the Athenian Democracy was the call back to truth for the civilization to which we still are holding on by our fingernails, the sacking of James Damore by the authorities at Google may be what will bring our civilization back to its senses again.

Western democracies – and the corporations which populate them – are in the grip of a lie. They are, year after year, making their way towards some oblivion in which truth no longer matters, where the foundations of science and philosophy, the work of great minds and inventors over millennia, are being torn asunder and replaced with dreamy emotion-generated ideology.

Socrates was put to death for corrupting the morals of young Athenians by an oligarchy whose moral sense had as much substance as that of the statues of the Gods they thought they worshipped. James Damore has been sent off into the desert to die by one of the greatest corporations on the planet. The culture which pervades that corporation, we can probably assume, pervades all the similar corporations for which Damore’s skills were a perfect fit and where he might have hoped to find employment. For calling out that culture and telling the truth which his scientific mind and expertise helped him to understand and explain, he will be no more welcomed by them than he was by Google.

The modern Athenian jury is still out on Damore. He has stated his case for the defence but the prosecutors of the New Morality of Political Correctness are still arguing their case. Public opinion is not smarter today than it was in the time of Socrates. Athenians two and a half millennia ago let the authorities there have their way with one of the greatest thinkers the world has ever seen. The culture of political correctness – which is at the heart of everything that Damore is questioning, and really all he has done is ask questions – has such a hold on our political institutions that nothing is certain about the outcome of this trial of truth.

Damore has put his case and commented on the public response and misrepresentation he has had to suffer in the past week.

I value diversity and inclusion, am not denying that sexism exists, and don’t endorse using stereotypes. When addressing the gap in representation in the population, we need to look at population level differences in distributions. If we can’t have an honest discussion about this, then we can never truly solve the problem. Psychological safety is built on mutual respect and acceptance, but unfortunately our culture of shaming and misrepresentation is disrespectful and unaccepting of anyone outside its echo chamber.

Despite what the public response seems to have been, I’ve gotten many personal messages from fellow Googlers expressing their gratitude for bringing up these very important issues which they agree with but would never have the courage to say or defend because of our shaming culture and the possibility of being fired. This needs to change.

His summary of his analysis of the problem with Google is as follows:

He concludes his memo with specific suggestions:

I hope it’s clear that I’m not saying that diversity is bad, that Google or society is 100% fair, that we shouldn’t try to correct for existing biases, or that minorities have the same experience of those in the majority. My larger point is that we have an intolerance for ideas and evidence that don’t fit a certain ideology. I’m also not saying that we should restrict people to certain gender roles; I’m advocating for quite the opposite: treat people as individuals, not as just another member of their group (tribalism).

My concrete suggestions are to:

Stop restricting programs and classes to certain genders or races.

Have an open and honest discussion about the costs and benefits of our diversity programs.

Be open about the science of human nature.

For this he was sacked.

Here is a fifty-minute interview with Damore by Dr Jordan B Peterson, himself a victim of the thought police in his own country. It reveals both the stupidity and injustice of what has happened as well as something of the character of the victim.